Last week Friday we took off to our adventure overseas.

It already started the evening before we left: we had to pack and a very strong storm, Ivar, was blowing outside, canceling the Christmas concert, making our friends to refugees at our place and at work and making our trip more interesting.

I went around 1am to bed and the alarm went off at 2.30am again. That was a pretty short night for me..

Finally everything is packed and we are ready to go

Our munchkin slept until we sat on the plane. He only woke up when I pulled him out of the sling and put the seatbelt around him. He didn’t notice the ride on the bus neither the security control.

When we arrived at the airport we were wondering about the long line at the KLM counter. But who cares we’ve Sky Priority and can go in front of the line. We did it and 15min later we held handwritten boarding passes and baggage receipts in our hands, knowing that our baggage won’t make it to Chicago together with us.
The terminal was half dim cause Ivar hadn’t just taken out the PCs of KLM but partially the electricity of the terminal too. Well, we didn’t mind this way we could stay sleepy for a little longer.
The boarding started about 45min later than scheduled cause the writing of the boarding passes took ages. On the plane was free seating cause the system didn’t work and if you had checked-in at home or not your original seats were gone. So we sat a few rows further in front than planned. 🙂
We arrived in Amsterdam about an hour late which was ok for us since we had an overlay of 4 hours. We got our new machine printed boarding passes at the lounge, had breakfast and took everything a bit slower.
M went with Ecky for a short stroll through the airport to let him pee but the outdoor terrace was closed and Ecky didn’t approve the big planters. So, no pee until Minneapolis.
Around lunch time the boarding for the next leg started. Our plane a 747-400 and we had seats in the eco comfort section. It felt like ages before we finally took off. Theo stowed on my seat with the baby seatbelt on and Ecky under the seat in front of M. The flight from Amsterdam to Chicago took with 30min delay 9h 15min. It was a smooth flight with friendly flight attendants. 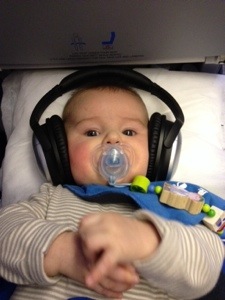 Yes, the plane had finally set its wheels on the ground in Chicago but instead of rolling pretty soon to a jetway we had a sightseeing tour of the O’Hare airport. We rolled for at least another 20min and we were already delayed. My stress level started to rise cause the next steps before getting on the next plane were: going through immigrations, getting our luggage, going through the CDC with Ecky, then with everyone through the customs, checking in again and going through the security check. But at that moment I didn’t know which obstacles were waiting…
We went through immigrations and the officer was friendly and chatty, picked up our luggage and went to the customs to find out that the CDC was at the other end of the big hall. Great with that amount of luggage! Well, we hauled it over there, rang the door bell and waited and waited and waited and waited. Finally another officer helped us and brought a lady of the CDC to us. She looked at us and told us that we’ll find our pet at another spot..no, he’s here with us. Ok, she stapled a little note to the customs declaration and that was it. :O She didn’t check Ecky’s passport if his rabies vaccinations are valid nor if it’s actually him.
Then to the customs: friendly again and the officer even told us where we’ll find the KLM counter to check in again. We arrived at the counter, having a scant hour left before our last flight was supposed to leave to find out that we had to change the terminal and to do that we had to take the Sky shuttle, no carts aloud on this one. M and I didn’t have time to think and we just took everything: Ecky in his bag, Theo in the car seat, 3 suitcases and 2 carry-ons. Of course none of the lifts were working and we had to use escalators or stairs. It was a work-out on his own. When we arrived at the other terminal, we both got scared: we saw a huge line of people all waiting for the security check. Holy moly! How are we supposed to make it?! But first things first: Sky Priority check-in counter. That took us 5min and we were good to line up for the security check which was the third one on this trip. We found the Sky Priority line and were theough it in about 15min. We had made it. The walk to the right gate took us another 10min but we were good and could start to breath again.
The flight from Chicago to Minneapolis or as they say it to the Cities (Minneapolis and St. Paul) was operated by Delta and Delta flights don’t carry any baby safety equipment as we were informed when we asked for the belt for Theo. :O Well, we swalloed hard and I promised my Theo not to let go of him no matter what would happen. 1 hour later we landed in Minneapolis and after a felt marathon from the gate to the baggage claim M’s youngest sister D1 picked us up. (M has three sisters and all the names start with a D, so that was D1. ;))
D1 is maybe 1,60m tall and drives a Suburban = a huuuuge car. Welcome to America. 😉
On the way to her house we stopped at a grocery store to get some diapers for Theo and smth to eat. It was cold outside, -10C and for the short way from the car to the store (15m) I had him just sitting, actually sleeping, in the sling and wearing a beanie.
Inside the store a black guy in a wheelie came up to us and started while pointing at Theo: I saw you walking in with the baby. He’ll get sick. It’s cold outside. I replied: He’s fine. The guy: You have to wrap him up. I tell you, he’ll get sick. I just replied shortly: He’s fine. I turned around and ignored the guy. We did the shopping but after we had gone through the check out one of D1’s kids called and D1 had to go into the store again. We waited inside the store for her only to be starred at by the black guy in the wheelie who was at the check out then. But this time I was prepared and he should have said one more word…fortunately D1 was faster and we took off.

The next day after a good nights rest and a nice breakfast we went to the Mall of America which is just around the corner. We were early there and missed the crowds of people. It started to get busier when we left. The rest of the day was filled with resting and chatting and in the evening we went out for dinner.

Christmas decoration at the Mall of America 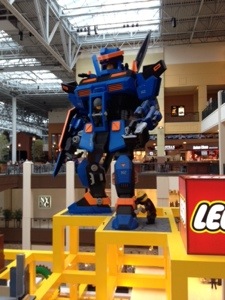 The fun park with roller coaster inside! the mall

On Sunday then we hit the road and drove north to Minong. Stopping at Target first and then at M’s brothers house for a short hello. Ecky played with Kirby, the brothers dog, and we chatted a bit while Theo was admired. 🙂

When we arrived in Minong it had cooled down a tiny bit to -28C and it was dark. M’s dad was happy to hold his youngest grandson for the first time and Ecky decided to snatch Chicos blanket and rest on it for a while. Chico is a tiny very skiny Chihuahua who lives with M’s dad.

Since then we have been enjoying M’s family, baking cookies and decorating them, snow shoing and just relaxing. Ed D2’s husband is feeding us every morning with blueberry pancakes or strangled eggs. 😉 Yesterday evening was hard on us though: the whole family came together to celebrate Christmas. We were a lot of people and Theo went from one arm to another. Theo got his first Packers jersey and a stocking with his name on and Ecky got a new toy. Ecky was among all of us and took a break in his little house when he felt like it. 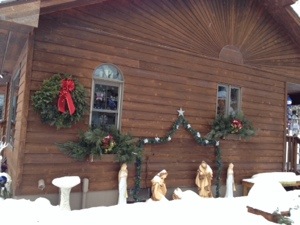 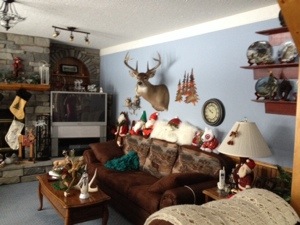 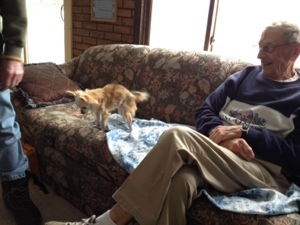 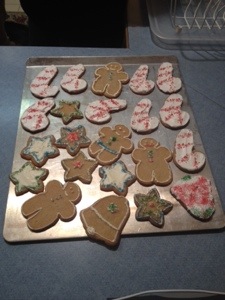 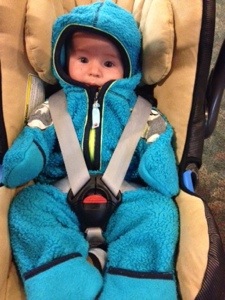 We wish all our friends and loved ones merry Christmas! *hohoho*

One thought on “Into the white”