And there we’re back home again. Our jet-lags are history, munchkin is going to barnehage again, the weather is most of the time cold and rainy but right now the sun is spoiling us at least until tomorrow.

The time in the US went as every time way too quickly. We went to La Jolla first where we stayed at a small inn for a few days. Just a road and the beach where separating us from the ocean. We watched sea lions and seals, pelicans, squirrels aka cliff rats and seagulls aka beach rats. From there we explored the nearby surroundings and found bakeries and cafes, a toy shop, the Legends gallery etc. We visited San Diego twice, once for picking up our bibs for the race and then of course on race day again. The weather god was good with us so the weather was chilly in the morning which was just perfect for us.

Our place where we stayed in La Jolla 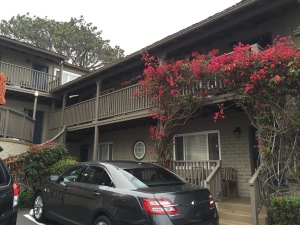 On the other side of the road 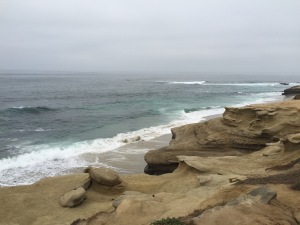 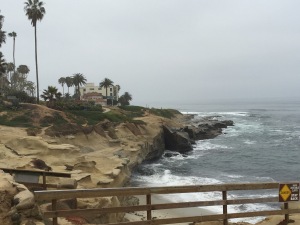 and off we go

After those days in California we were ready to climb on the next plane and head north to Portland to visit the house and our friends. Those days were definitely too short. All three of us enjoyed the warm weather and catching up with our friends. Munchkin went to the playground and played with a lots of dogs.

If the tree house is too boring, we just leave. Who cares about a bouncy hanging bridge?! 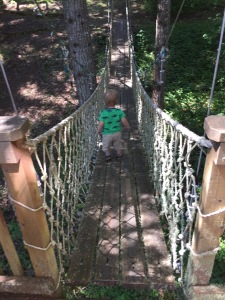 We ate a lot of cherries. And I love Reinier cherries. 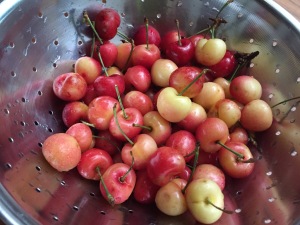 Food pouches work for kids…why not for dogs then too?! 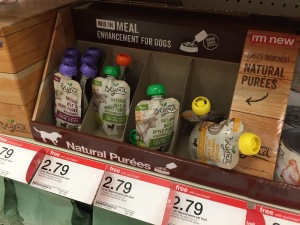 Way too colorful cakes. Wondering how many kids are going in overdrive after a piece with the good and toxic yellow or red food dye?

Dinner at the pond. 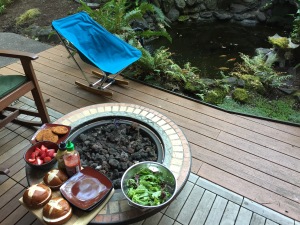 Our friend had just gotten some new water plants for his pregnant fishes to hide in.

After a week in Eugene we had to say good bye and start our home journey. First we went back to LA before we finally headed to Amsterdam and Trondheim. We stayed at a hotel in Redondo Beach which I didn’t like too much. The hotel was nice but the pier area itself felt kind of worn down.

At a fish market where we had a nice dinner: grilled Opah and munchkin had grilled Salmon but liked the Opah too.

When we flew over California we could see the imprint of the drought. The lakes were almost gone or diminished, a lot of fields were brown and wherever you looked it was just brown tones which you could see.

Munchkin stayed entertained watching planes whenever we had the option. He was my superhero on the plane cause he behaved so well and didn’t make a fuss.

Look from the lounge in Seattle

Somewhere between LA and Portland

Our stroller does fit into the overhead bin 😉

Back in Trondheim we didn’t have the time to relax and just arrive, sleep through our jet lag or just take it a bit slower. No, we had to be right back because our Ecky had suffered a severe prolapse and both of his back legs were and are lame. He has improved ever since but it’s going to be a very long way back to his running around and jumping up and down. I exercise with him and massage him everyday and we all are hopeful that he’ll be back sooner or later. 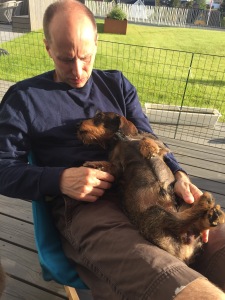 Since we have come back I’ve prepared this bread a couple of times and just today I made 4 loafs of it.

It’s called a wheat mix bread and each loaf weighs about 1.5lbs

Something I really don’t like to do but which I’ve to do every week: ironing…

Have a good and ironing free week. 🙂 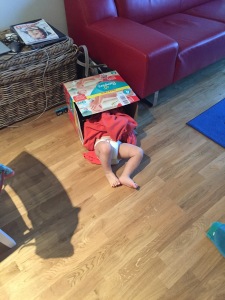 For what do you need toys if you can have your dogs blanket and an empty diaper box?